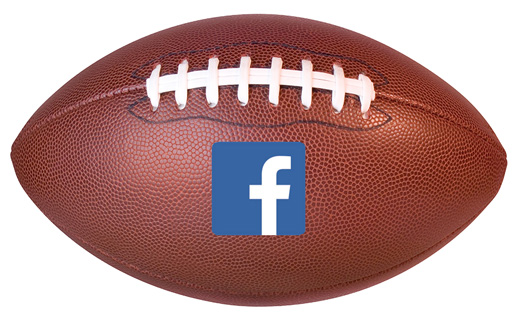 The National Football League has long been a dominant force of American culture. Each fall, our televisions and mobile devices are flooded with content surrounding the games and latest news from teams and players. Publishers count on clicks and views on football content to drive ad revenue, so it’s no surprise that they constantly look out for ways to encourage more buzz, as Facebook did with its recent Sports Stadium launch. Now, Facebook’s in the running to add the most prized content of all to its platform this year: the games themselves. Today, television networks are scrambling to adjust to a changing media landscape – streaming video and DVRs give viewers flexibility to watch their favorite programs on their own schedules, often skipping ads. The most valuable programming, then, is live event programming, with sports at the forefront – it’s no surprise that the NFL collects more than $5 billion annually from its television partners. The league is looking to expand that revenue source by offering the rights to stream its Thursday night games live online. Last season, Yahoo paid $20 million for the streaming rights to a single game, which attracted 33.6 million views; this year, Facebook is among the finalists for the entire package.

At its core, Facebook is an advertising business. Until recently it has seen fit to host users’ content rather than producing or buying its own, but what better way to break into the live broadcast business than with the most ad-friendly events available? Advertisers have yet another platform to address consumers, and Facebook gets another stream of user data to take advantage of. The company estimates that 650 million of its users are sports fans; even a small percentage of them watching would be a massive gain.

An issue that could drive down the price tag for Thursday Night Football: In the U.S., the NFL has sold the TV rights to CBS and NBC, which have five games each. Eight other games to be broadcast only on the NFL’s own network will be Thursday night games, late-season Saturday match-ups and other games. And those networks all have rights to stream the games to U.S. pay-TV subscribers. Separately, CBS is talking to the NFL about expanding its distribution rights to include the CBS All Access subscription-streaming service starting next season.

Further complicating Facebook’s interest is the issue of mobile, which represents a quickly growing share of revenue. Verizon (which, along with Amazon, is also bidding for the streaming package) holds the mobile streaming rights to all NFL games, an attractive package that Facebook would surely covet. Facebook’s potential move for desktop and connected TV streaming this season could be a play to get their foot in the door to take a shot at mobile streaming too next year. Either way, this is yet another step in bringing television programming online.